In the September 27 episode of Anupama, it was shown that Anupama comes to Paritosh and says that if you want to die, then there is a new knife in the kitchen and cut the vein with the knife you have taken, even boiled potatoes will not be cut. Paritosh says that if my life is not worth living, then you kill me too.

Anupama says that if you want to die, then why do you live  till now.   You have been missing for two days, wandering here and there, would give life. Anupama says that you can just threaten, you can’t give life, and your father can become foolish with these threats, not your mother, you have come after drinking alcohol to meet your wife and child, while at home your father and father are all upset and you have come here. You are doing drama and what can a man like you do even if the tears of a crocodile are competition in the world, then all the crocodiles will be defeated by you.

Anupama says that it is right to make a mistake first, then pretend that your wife forgives you

men like you abuse your wife after drinking alcohol at night and waking up in the morning to apologize that please forgive you. was intoxicated. We don’t want your sorrow.

On the other hand, Baa was taunting Anupama that she had come for a while and then went away after a while. Babu ji says what do you wish that she would remain the same, after hearing this, Baa says that you will always favor Anupama, then Babuji shouts and strictly refuses to speak anything to Baa.

Kinjal talks to her child. That daughter, I had seen the house of my dreams in which you were mama and papa, but mama is not able to make any decision now because mama is not alone, she is a woman as well as a mother.

Anupama tells Paritosh that if you had to apologize, you would not do it like this, but you would bow your head and apologize and leave the decision on your wife,you do not force  to forgive you or not Do not come

Anupama further says to Paritosh that   men like you, who become men according to their needs, women also need

Paritosh refuses to go, he says that I will go only with Kinjal and he starts throwing all the things and tells Anupama what do you want, Anuj gets angry after hearing that my Kinjal is sitting here. He goes and grabs Paritosh by his neck and drops him on the sofa and says that if you want to make a spectacle, then do it, but do not tell anything to my Anu, then Anuj tells Anupama to call his father Vanraj, then Anupama to Vanraj Anuj calls and says that your son is coming to our house and breaking it, then Anuj tells everything to Vanraj.

Barkha Ankush and Adhik also come recently, Paritosh shouts and says that I will not go.

Then Vanraj comes there and takes Paritosh with him, Paritosh reaches home in a state of intoxication, everyone comes to him and gives him medicine to reduce his intoxication. Vanraj sits holding his head and gets very upset, when Babuji comes to him, he apologizes to Babuji for his unintentional mistake because Vanraj had also harassed his mother Babuji in the same way. Says babu ji, I can see everything but I can’t see all this, he says that earlier when he used to see a kuput, he used to think that why parents do not throw such children out of the house, today I understand why they are unable to remove them. Hey.

Anupama goes to her room where Anuj is sitting, she gives medicine to Anuj silently and starts leaving, then Anuj takes hold of Anupama’s sari, Anupama sits beside her and puts her head on his shoulder. 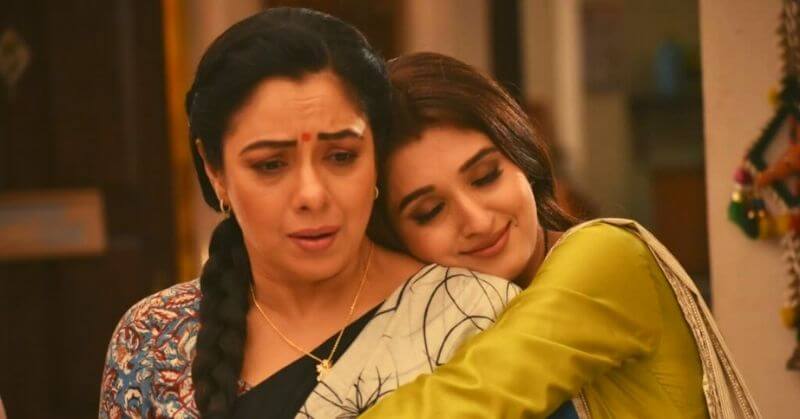