Anupama was shown in the episode of 22 September that Kinjal tells Rakhi that you call yourself a modern woman, but if you know the truth of someone, then come to the function in the middle and tell the truth by shouting loudly but not to your own daughter. Told The truth of Anupama Mummy did not hurt me, but you have hurt me. Baa tells Kinjal that if you want to go, then you go to your mother’s house. You will not go to Anupama’s house, if you want Anupama, then I will call her now .

Kinjal says that for what right do you call Anupama Mummy, you are giving her salary, after hearing this, Baa says that I am her mother.

Kinjal says that when did you last hug her or when did you make little Anu sit in your lap. Kavya says never. Just when Anupama has to be called, then baa remembers that I am her mother .

Baa tells Kavya that you are my mother-in-law or I am your mother-in-law. Then Baa tells Kinjal that he will not go to Anupama’s house.
On the other hand, it is shown at Anupama’s house that Adhik is telling Barkha and Ankush that there is a news, just then everyone looks towards the door at the sound of the cry of the child, where Kavya is standing with Kinjal and Vanraj Baby Arya . He gives Anupama in her lap and says that Kinjal was not able to stay there in Shah House, she wants to stay with you, then Vanraj also apologizes to Anupama.

Samar goes to meet Paritosh and tells that Kinjal is very angry with him. Paritosh says to talk to my kinjal or show it on video call from a far. Then Samar tells that Kinjal is not at home, she has gone to stay at mother’s house.
Paritosh gets angry and says that the Goddess is not mother. The Great Anupama’s house as she broke her marriage will instigate Kinjal to break the marriage. Samar says that brother everyone cares about you at home, that’s why I have come here. Paritosh says that I love Kinjal and my daughter Pari very much, I cannot live without both of them. After hearing this, Samar says that where was this Love said when you were cheating your wife?”
Paritosh says that everyone is telling me a mistake, now you are also giving a lecture to me here, he further says that I do not know what mummy gets to do all this. She has become a goddess, now she needs Bhagat, which she will not get better than my wife. Because of them, my daughter Pari, my Kinjal is away from me, my father has thrown me out of the house,
Samar says that brother, you still feel that all this happened because of mother, so Paritosh shouts and says that you only tell Because of what happened, then Samar also says that brother, all this happened because of you, neither you would cheat sister-in-law nor all this would have happened.
Then Paritosh says that I am the worst in this world. I die, go and tell everyone that Paritosh has died.
On the other hand, at Anupama’s house, Kinjal tells Anupama that I am sorry that I have come to your house without a inform.
Anuj says that no apology is not needed, there is no need to ask a daughter to meet her mother, Vanraj says that due to responsibilities, he could not see his children grow up and now because of Paritosh, now his granddaughter I can’t even see her childhood. Then Anuj tells Vanraj that you can come here to meet your granddaughter whenever you want. Seeing this, Barkha says that the one who was afraid happened the same Anupama who also came, because of this girl, both the families have come very close,
when Vanraj starts leaving, the pari starts crying, Kavya says that she is the angel. She is crying but Vanraj does not look back, he says that if I look back, I will not be able to leave.

On the other hand, it is shown in Shah House that Ba is taking out his anger on clothes, she says that after washing all the clothes in the machine and spoiling them, then Babu ji says that those that are spoiled should be torn and those clothes are torn. Babu ji says that it was necessary to get out of his anger or else he would have gone mad. Pakhi hugs Ba and starts crying. Babu ji says that crying will become lighter.
On the way, Kavya tells Vanraj that I don’t know why I was crying while separating from the pari. On hearing this, Vanraj says that even if an alien child takes hold of his hand, then love comes, it is my own granddaughter, O Kavya. I understood today that even after the separation of the couple, they fight for the custody of the children, why they are not able to separate from the children.
The bond between you and Anupama is because of the children, O
Kinjal says to Anupama that mother, I have made your problems worse by coming here, Anupama says that this is your home, stay as long as you want Anupama says that I should Anu leaves the school and knows the office, Kinjal says that it doesn’t matter, mother, do your work, then come to me,
Pari cries a lot, if Kinjal keeps quiet from her, then the barakha comes, she says that I feel sorry for you Anupama. That SO poor thing to do for your house, every day something or the other keeps happening, Anupama never got happiness.
Anupama comes to Anuj and says thank you for understanding me. Anuj says that I have loved you because you are attached to your family.
And that’s where today’s episode ends. 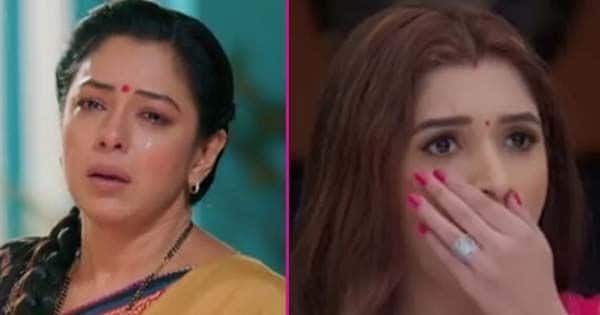